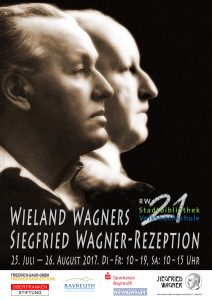 Siegfried Wagner, who according to a saying by Martha Mödl, had the misfortune of being the son of Richard and father of Wieland Wagner, was the very first composer on which his son, the later renowned stage director, made his first attempts of revolutionary scenographic innovations.

Iconic One Theme | Powered by Wordpress